Over three straight days with temperatures flirting around 35 degrees,VH1 Supersonic gave their sweaty fans the chance to dance themselves clean.

Vh1 Supersonic this year was blessed with beautiful summer days; it was 3 days of the sun shining brightly in a clear blue sky, 3 green lawns packed with festival goers, interactive exhibits, a brew garden for thirst quenchers and great music. 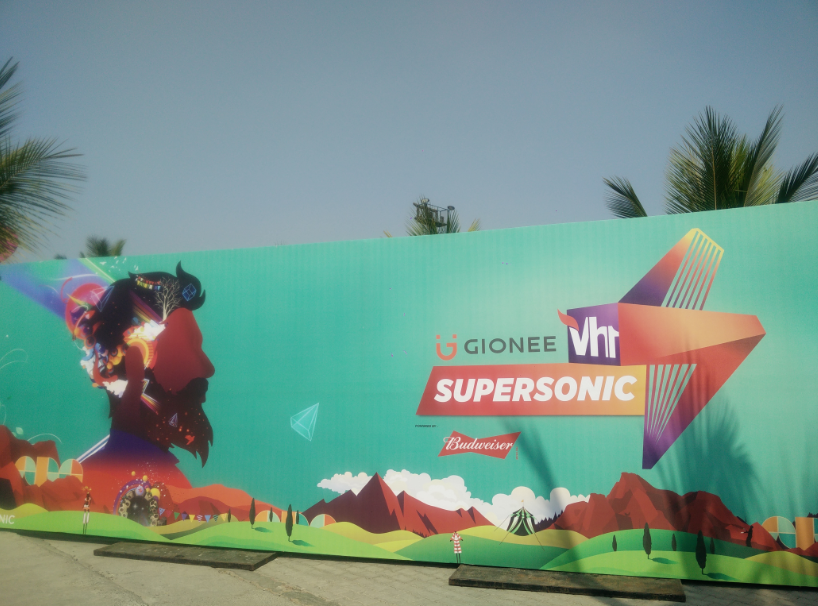 One of the highlights of this festival was the payment system- no chaos over money, you could simply load your microchip with the desired amount & swipe it at the bar & food counters. This cashless payment system was executed flawlessly.

The Gionee Stage was dedicated to drum & bass and experimental sounds, and was the smallest of the 3 stages. The vibe here was relaxed as people lounged around on the lawn, prepping themselves for the power-packed evening ahead. The tempo picked up later towards the night as the sun set & people made their way to the stage up in the front. 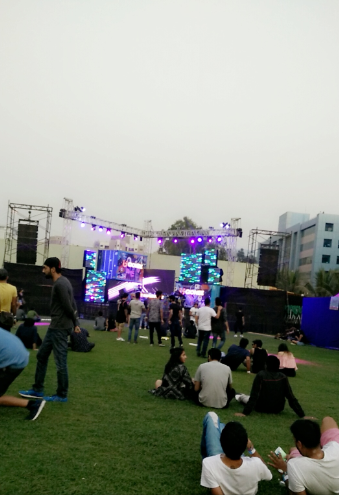 Awakenings was my favorite stage at the festival. It was the techno stage that for not even once saw a drop in energy (precisely why I loved it) The set up was that of a nightclub back in Amsterdam, we were told during the media preview, and I saw the truth in this statement on the first night of Vh1 Supersonic. 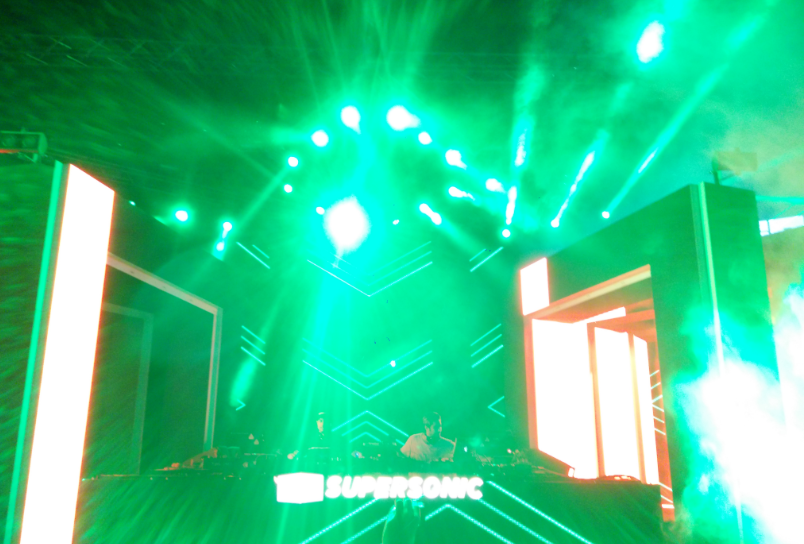 The Sonic Realm was the main stage, and was set up in a dramatic fashion, likes of which have never been seen in India. The forest-like dramatic setting with a dragon head for the console was great for gazing up a trippy visuals.The end result of this larger than life set up proved that an experienced set of super talented individuals had made this happen. 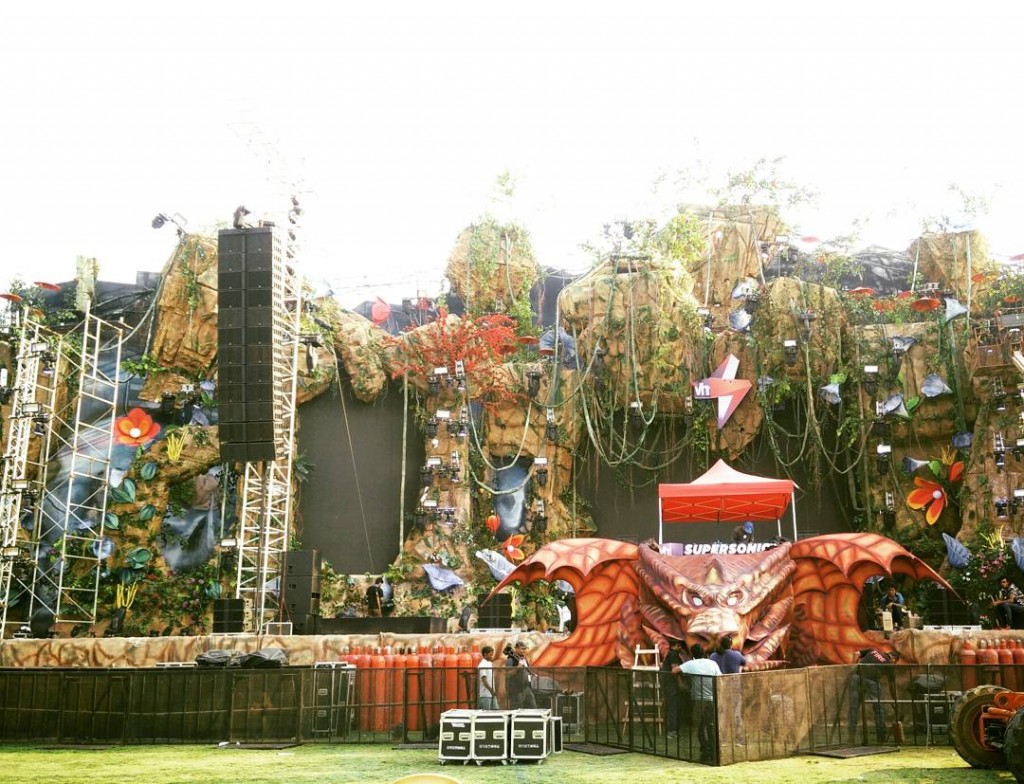 An interesting thing to note was the setup of the Flea Market. Designed around a traditional village theme with a major influence of art, this section of Laxmi Lawns was a bright, happy place with happy vibes, happy people & super delicious food. The food options to choose from were plenty, and we ate at more than 8 stalls over 3 days. Our favorites were Mexican Rodeo (the grilled chicken burrito rice bowl!), Pimp My Wok and BUTTER CHICKEN FRIES FROM THE BOMBAY FOOD TRUCK! 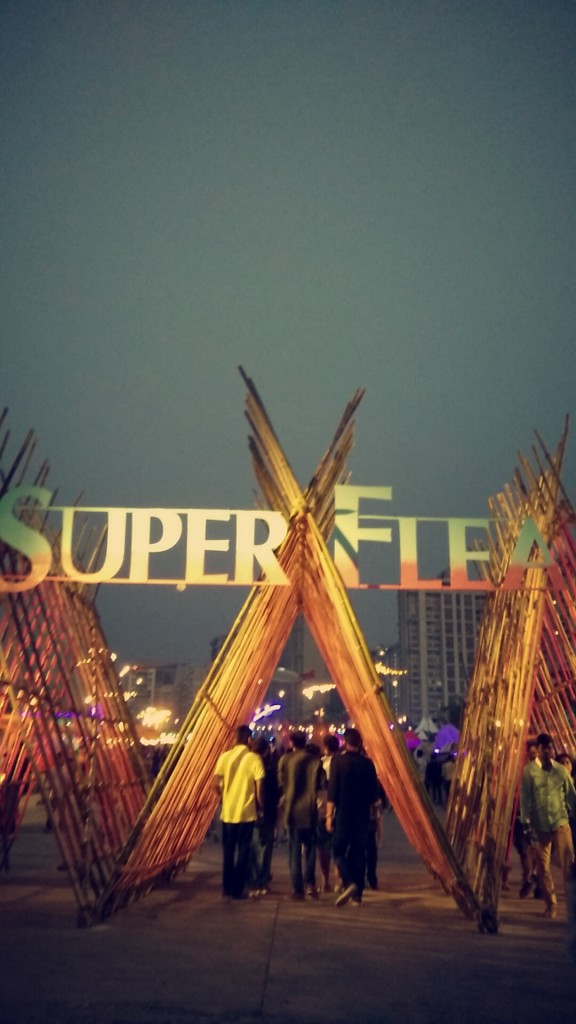 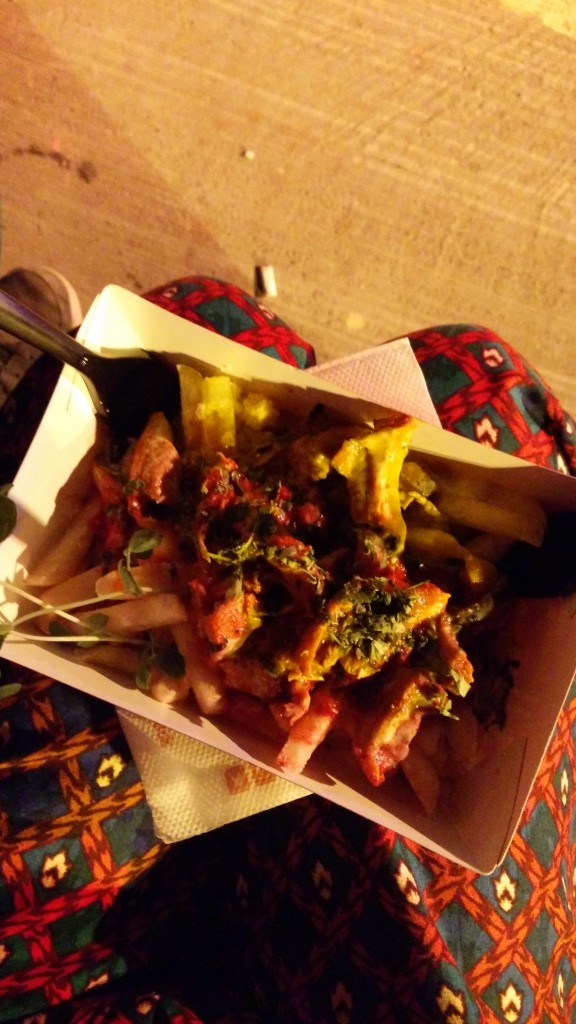 The bars were spread over the venue, and were well managed except for those times when they ran out of beer (not being a fan of beer this didn’t really affect me, but I could feel the irritation around me) The best part of the bar was the prices on the menu; 150 bucks for a pint of Budweiser, Magnum for 200 bucks, 300 bucks for Teacher’s, and a Happy Hour 1+1 offer to name a few. Of course the bars were crowded!

The Pune chapter of Vh1 Supersonic was filled with memorable performances. Leaving you with some of my favorite moments_

Joris Voorn proved why he is the demi god of techno music. Tuhin Mehta and Ash Roy joined forces for a power packed night of techno. Arjun Vagale got the adrenaline flowing with his beats. MackleMore put up a great concert of sorts with visuals, dancers, music and crowd interaction. &Me got the crowd grooving, Aly & Fila had the crowd jumping & Curbi held the crowd’s attention, as if in a trance. Zedd was the commercial name that got many to the Sonic Realm on the last day, and while the tracks were something we have heard a million times all around, popular tunes known to those who’re new to electronic music or those who prefer EDM over other genres, tracks played at all night clubs on commercial nights, it was the visuals that made Zedd’s act a memorable one. 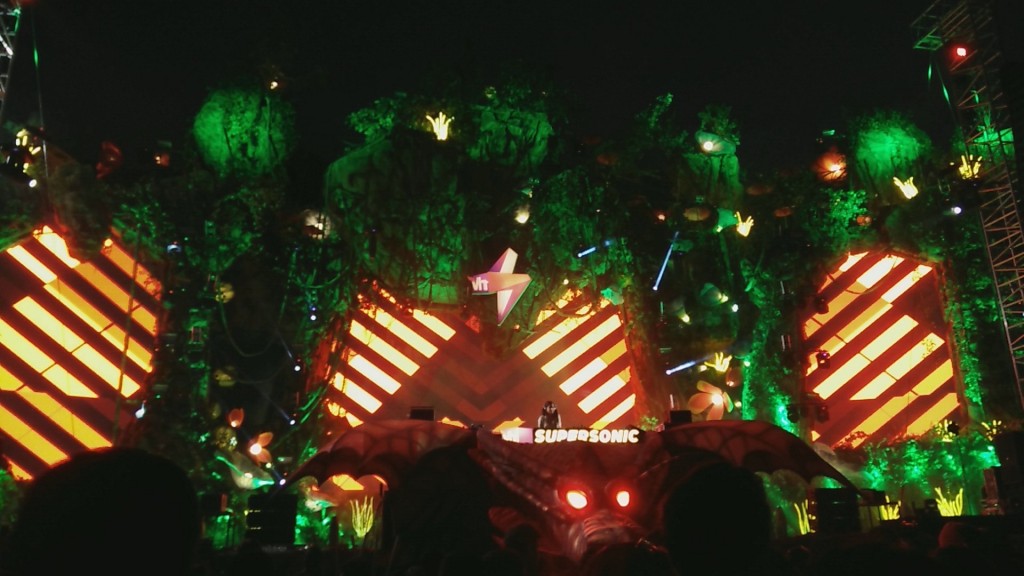 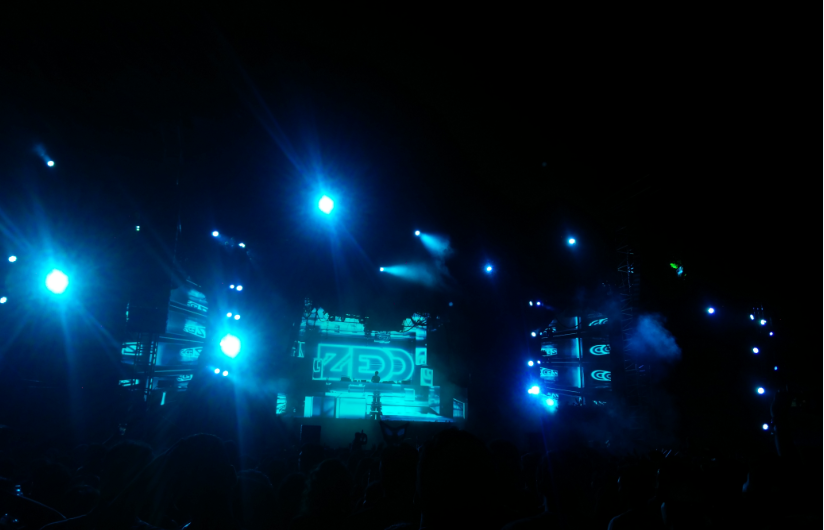 Lastly, there was Eric Prydz :)

We also got lucky with this view- 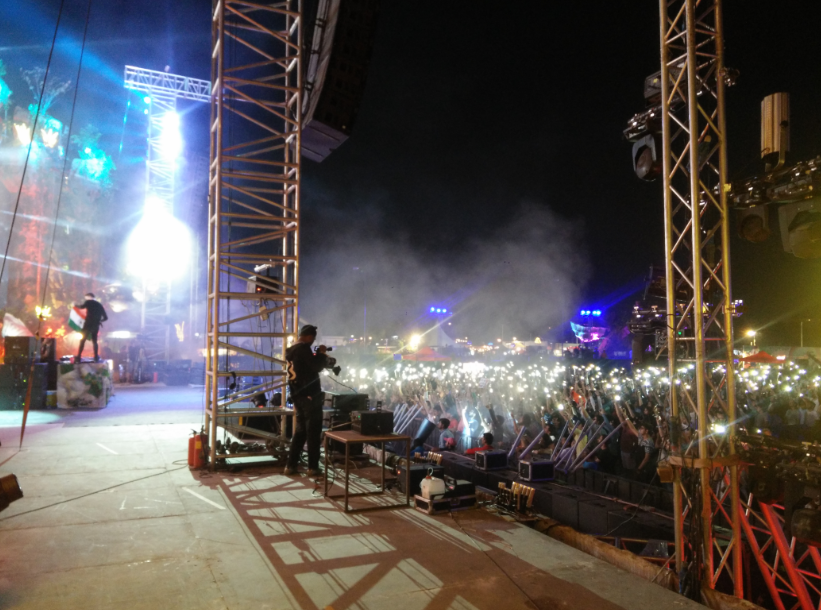 You can check out the videos on my Instagram profile right here.

2017 saw Vh1 Supersonic push their boundaries, bringing an unparalleled combination of the world’s best electronic and techno acts, and some cutting edge production. Vh1 Supersonic believed that 2017 was the year of transformation, and they set out to do this keeping in mind the youth capital of India, Pune.  We’re glad to see that it was a great success.

Nikhil Chinappa’s closing speech thanking his team, the artists and his wife almost had me in tears. It’s not every day that you see such humility coming from someone responsible for such a great revolution. The fact that he found it imperative to introduce his team to the audience, to thank them all, and to just let everyone know how they supported him through his journey was enough to make us feel like a part of the entire Supersonic family.

Before I end this, I must say I am extremely proud to be part of a city that pulses with this energy, vibrancy and youth culture :) 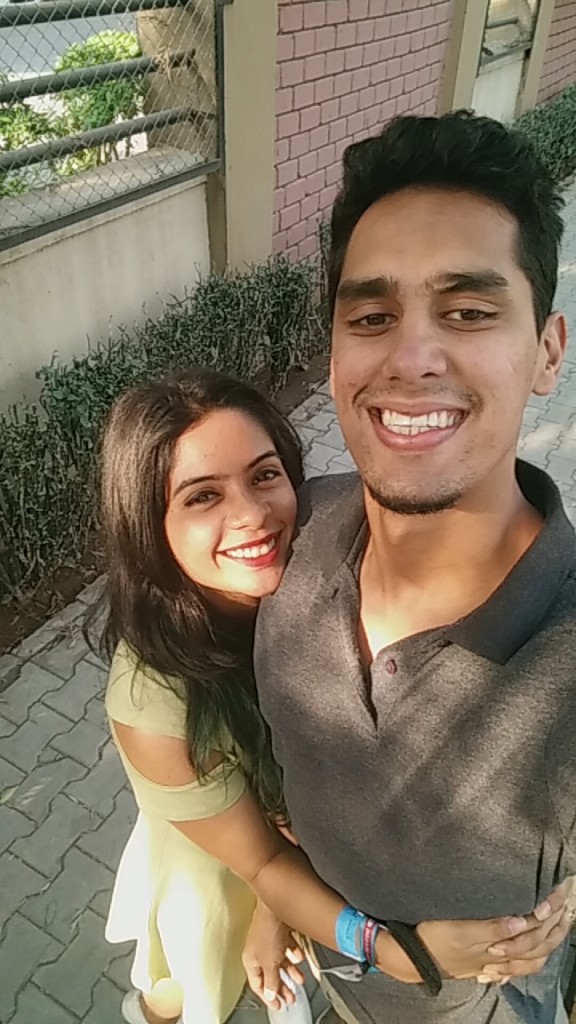