It was a cold Saturday morning in the pink city as I walked into the gates at Diggi Palace, the venue of the Jaipur Literature Festival 2016.  A packed roadway leading up to the gates caught me unawares as I stood in line to get my bags checked (Note- the security needs to be beefed up, there was hardly any frisking or checking. Outside eatables were being “smuggled” in too!), and I was genuinely surprised as I walked in to see THIS- 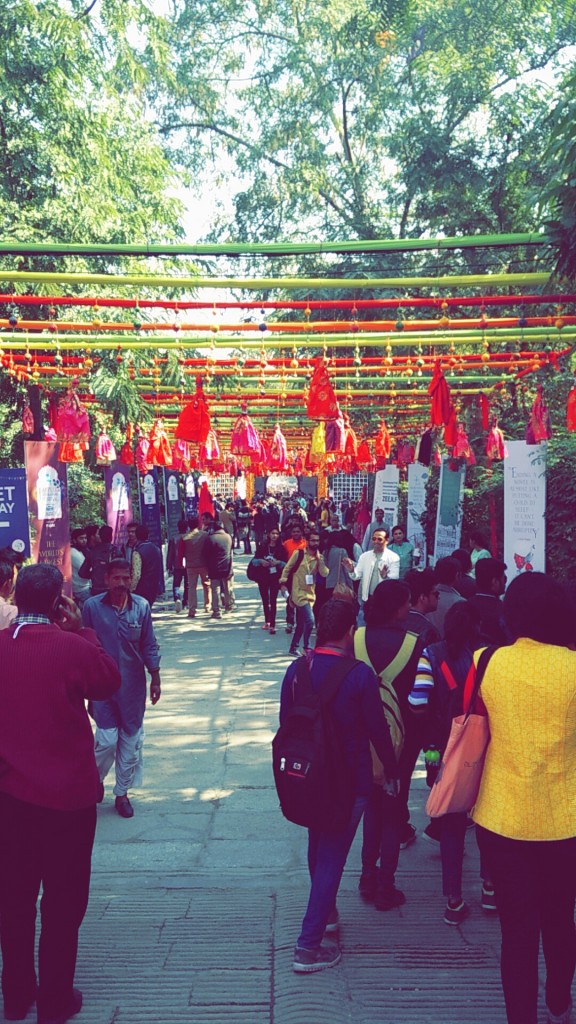 This area was thronging with attendees as they posed to click the colourful decor and of course, selfies. I quickly made my way to the front desk and got myself a schedule, excited about the prospect of listening to so many great panellists. And it’s not every day that you attend international literature festivals in the grounds of a 200 year old royal palace in the heart of a city :) 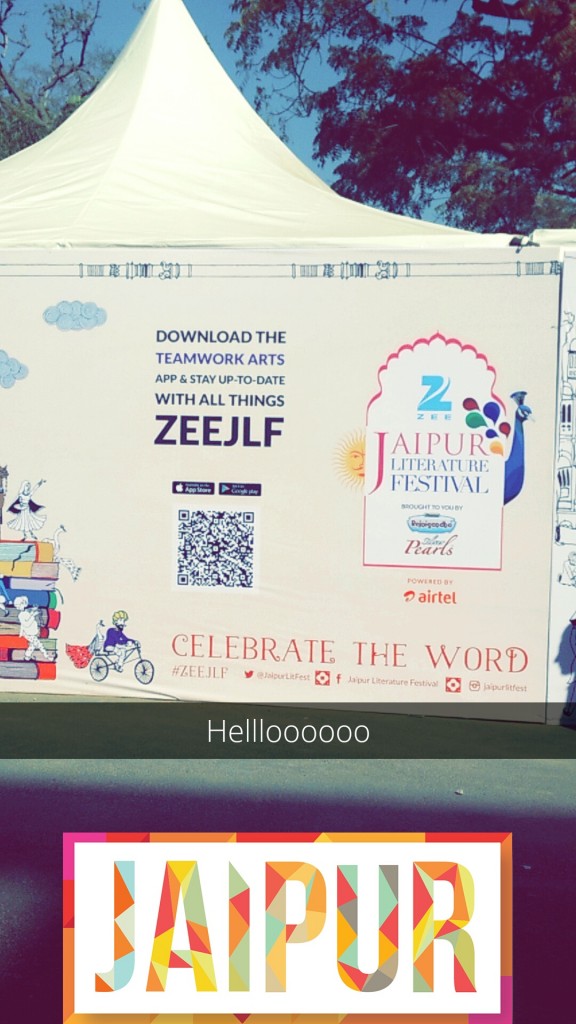 I walked in to see Rajnigandha Silver Pearls Front Lawn packed with curious attendees and onlookers, waiting for the dialogue between Sudhendeera Kulkarni, Syed Salman Chishty, P.Sivakami, Pinky Anand and Kalpesh Yagnik to start. The panelists discussed politics, religion and the urgent need to separate violence from the two. This session was moderated by Shashi Tharoor. Though I was not particularly interested in the topic, I stayed back only to listen to the captivating speaker that is Shashi Tharoor. I then walked over to the Google Mughal Tent where Esther Freud and Hannah Rothschild discussed the nuances of being a writer. While they discussed the passion with which every story teller told their stories and the real fear that consumed them just the night before they were being published, overcoming the fear of being judged, and writing with an intensity that shook your soul, I couldn’t help feel inspired by the wonderful ladies on the panel. This session was moderated by Alexandra Pringle, their publisher. 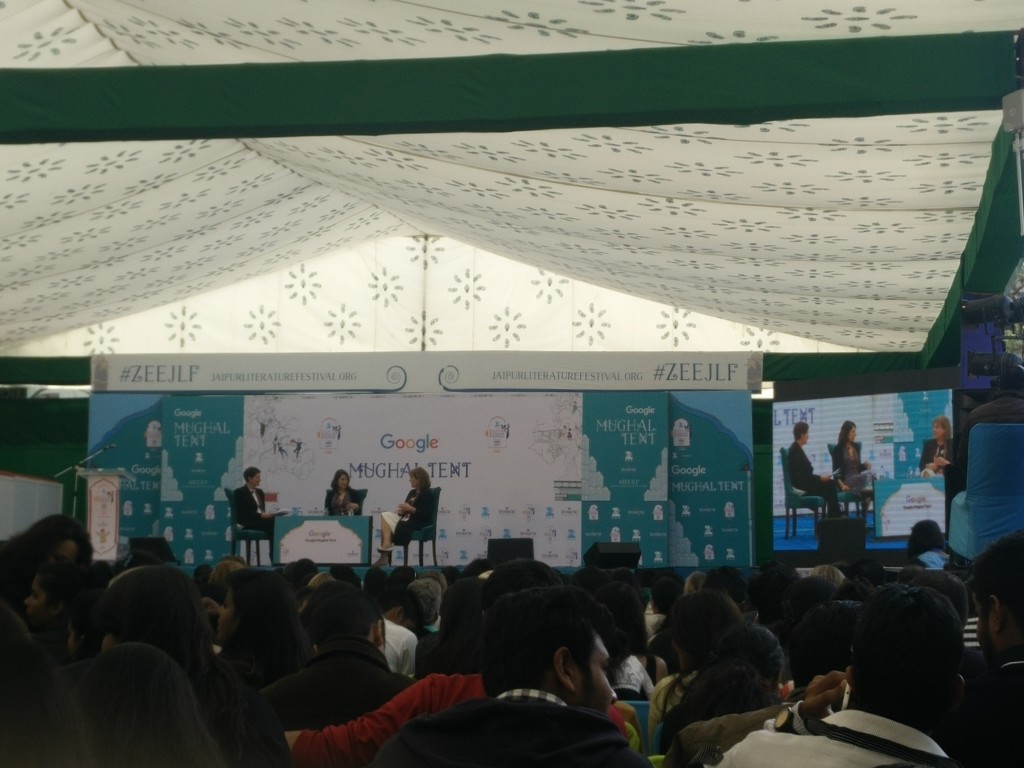 I caught a few snippets of the conversation between Shobhaa De and Ronnie Screwvala at Char Bagh as they discussed what it takes to build a successful business. With the start-up culture taking over India, the points they discussed on the changing business landscape and the spirit of entrepreneurship were quite helpful.

I also stopped over for a book launch of ‘Rajasthan On A Platter: Healthy, Tasty, Easy’ by Suman Bhatnagar and Pushpa Gupta. The book was released by Ram Pratap Diggi. This book spoke about Rajasthani cuisine, giving it a scientific spin by talking about the nutritional value behind the different Rabi and Kharif crops, health benefits, and science behind cooking this cuisine and a lot more.

‘Faces In The Water’ was an interesting conversation between Paro Anand and Ranjeet Lal while they discussed the disturbing subject of female infanticide. They discussed how sensitive subjects were kept hushed and the need to break through the unspoken taboos and discuss the real world we live in. “It’s okay to speak about death, but it’s unacceptable to discuss sex” was a powerful and deep thought that I left the session with.

The last session for the day was about homosexuality, with an impressive panel comprising of Colm Toibin, Armistead Maupin, R.Raj Rao and Hennry Finder. In a world where same sex couples routinely get married in some countries while in others they’re jailed for being gay, sexuality remains a complicated issue globally. The panellist discussed the hardships that are faced by homosexuals in daily life (“How do I tell my mother?”, “How do I tell my FATHER?”, “Let me tell my brother first… he’ll probably tell everyone else and I wouldn’t have to go through the uncomfortable process of telling everyone in person”, “Will they fire me at work?”), the awkwardness of hiding basic sexual needs for the fear of being ridiculed and how we need to support them in the struggle to get a normal life. 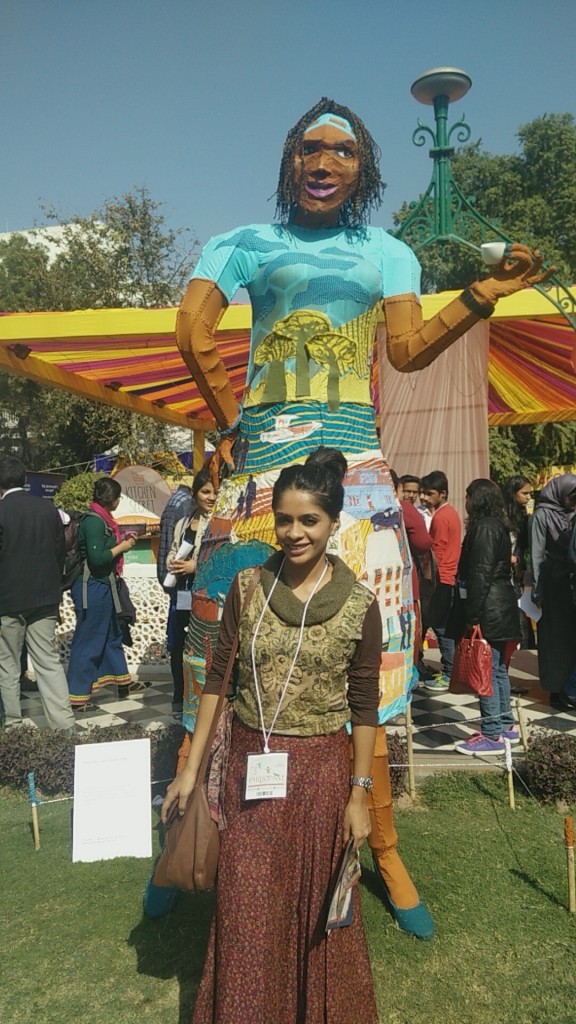 Day 3 (my day 1) ended with a musical night with the Karsh Kale Collective. While it was an entertaining evening, I couldn’t really function much on an open lawn in the 9 degrees winter, even though I probably had 30 layers on.

Day 4 was, if possible, more packed than Day 3. The Delhi crowd, local junta looking at a fun weekend outing and the attendees together made the palace grounds resemble a chaotic fair of sorts. 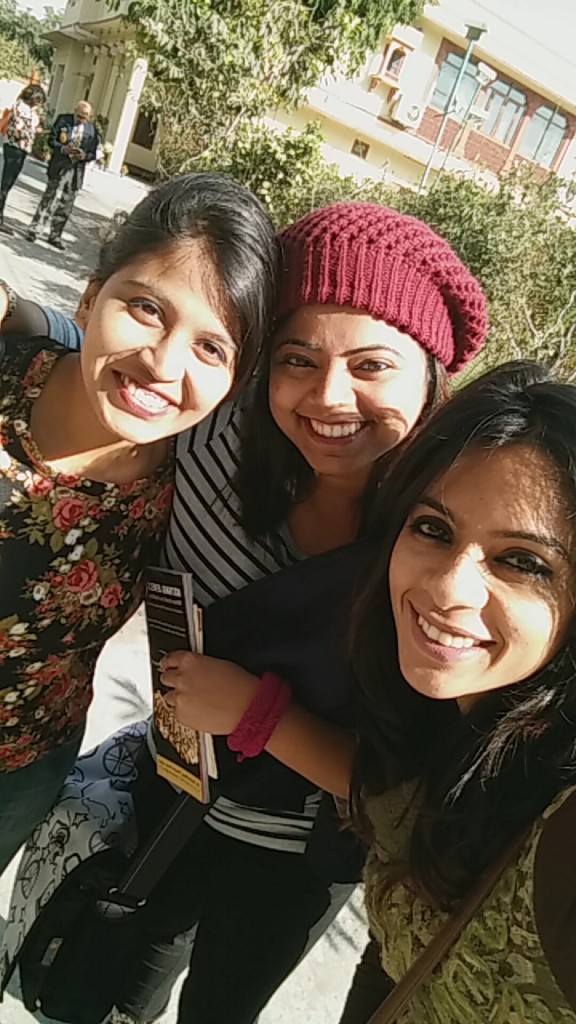 I decided to attend an early morning session at Char Bagh that discussed the great partition. The panel consisted of Ayeha Jalal, Shahazia Sikhander, Nisid Hajari, Venkat Dhulipala, Yasmin Khana and Urvashi Butalia. They discussed how nobody had expected the liberation of India and the birth of Pakistahn to be so bloody. Partition was originally planned as a solution to the demand for an independent state by both Hindus and Muslims. This session was particularly interesting as they discussed the conflicting opinions of Nehru and Jinnah.

The Cupid’s Bow and Kama’s Arrow was by far the most interesting session I had attended at JLF. The panel consisted of Vidhya Deheijia and Caroline Vout conversing about erotica and desire. This session started off with Caroline taking us through sexuality in Roman, Greek and Indian cultures. She discussed how nude figurines of women were worshiped and sexual acts considered divine. She took us through pictures depicting nude Gods and Goddesses in various stages of sexual intercourse and gave us details about the importance of the act of consummation in a human’s life cycle. They ended the session with a thought-provoking sentence: We need to celebrate erotic literature and find ways to talk about this expression of joy without being shy about it.

The book launch of Rituparno Ghosh : Cinema, Gender and Art was an interesting session with Sangeeta Datta, Kaustav Bakshi and Rohit K Dasgupta as they discussed the legend that is Rituparno Ghosh. The panellists discussed Bengali films, how Rituparno Ghosh was one of the finest filmmakers to emerge out of contemporary Bengal and how he managed to bridge the gap between traditional and modern cultures through his cinema. They also went on to discuss his contribution to the LGBTQ movement in India.

A Poetic Genealogy by Javed Akhtar saw a massive crowd that seemed to be pouring out of the designated stage and lawns. To listen to that voice recite Hindi and Urdu poetry in real life is probably one of the happy memories that I will die with. Not only is he a fantastic poet, there was humor and charm that kept the massive crowd entertained. The moment he switched over to Hindi from English(“Talking about Urdu poetry in English is like eating biryani with a spoon and fork”) saw the crowd erupt with applause while I sat transfixed, my body filled with goosebumps. 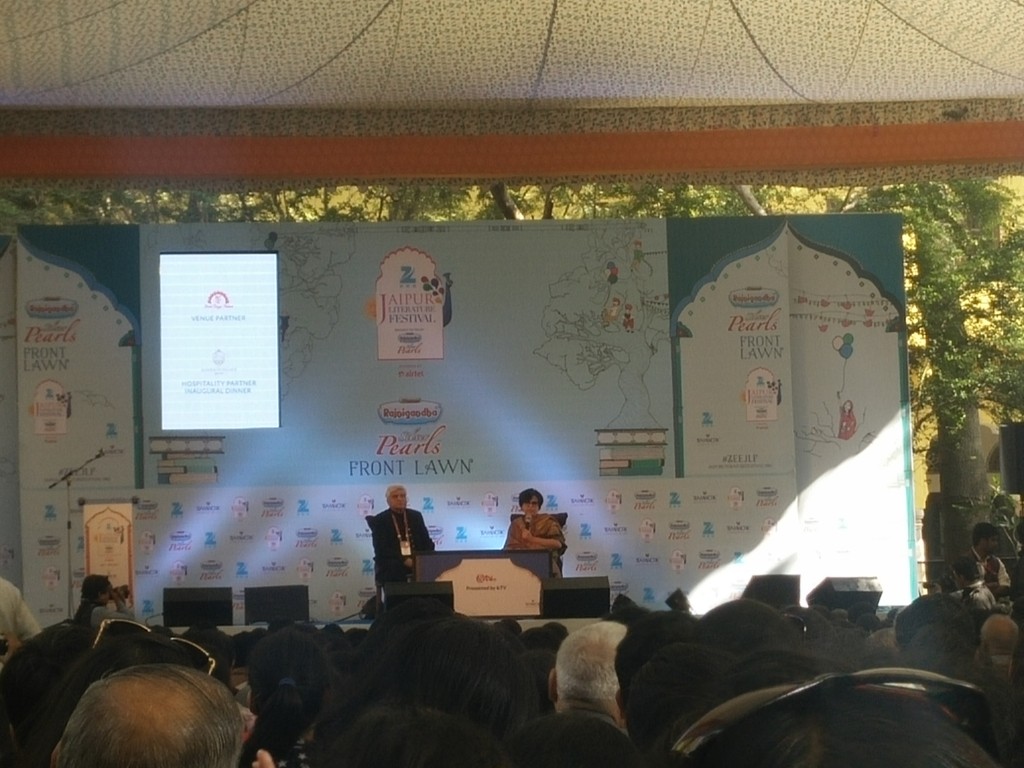 The book launch of “Conversations at Jaipur: The Spirit of JLF” with Amish Tripathi, Bibek Debroy, Namita Gokhale, William Dalrymple, Urvashi Butalia and Sanjoy K Roy was a fun affair where they reminisced old times at previous JLFs, and how it had taken them a lot of effort to coordinate with all the authors across the globe to get this book in place. The tales of the chaos were interesting, and I learnt what a charming story teller Amish was in person. 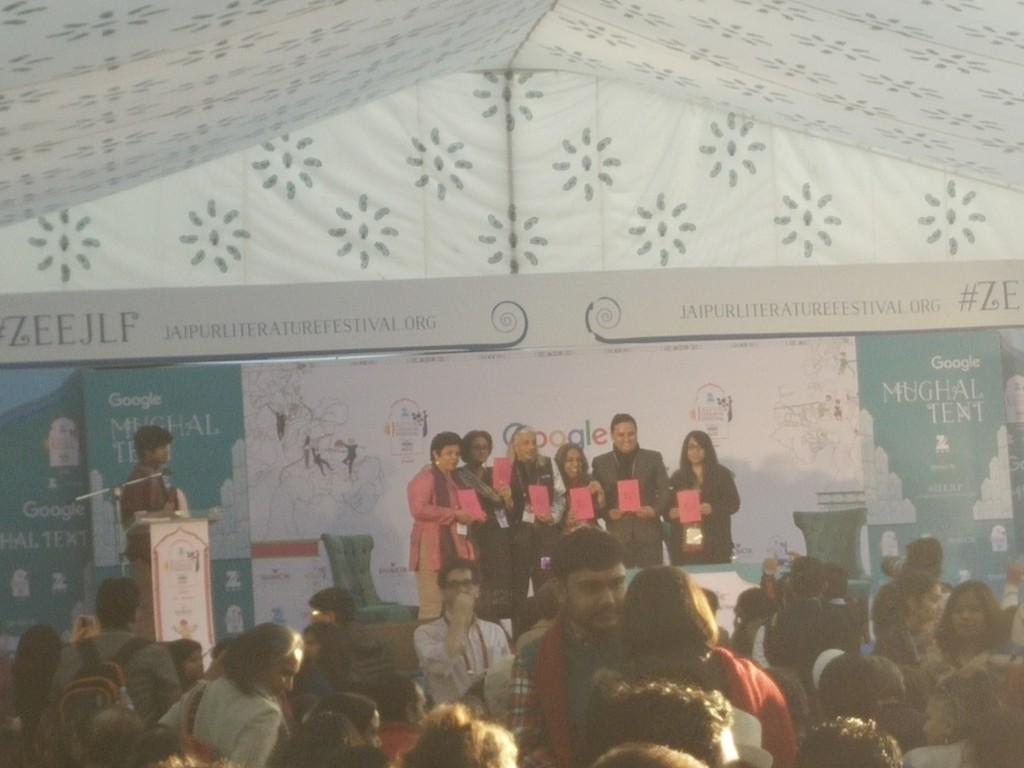 A fun thing that happened on Day 4 of JLF 2016- I got featured in The Quint :D For someone who has never understood fashion and was aiming to protect herself from the cold without looking like too much of a hobo, I think this was a great deal.

The last day was a pleasant surprise when I walked in to find the palace grounds empty. I also managed to find myself a good seat, and as I sat to attend my first session moderated by Jerry Pinto I knew it was going to be a good day. Anjum Hasan and Nilanjana Roy discussed literature and creative communication. It was an absolute delight to listen to the velvety smoothness of Nilanjana’s voice as she read out a passage from her book “ A Girl Who Ate Books” while Jerry Pinto had us roaring with laughter with his witty remarks. My favourite part of the session was when they spoke of books enabling travel, and how it was possible to experience so many cultures by reading. 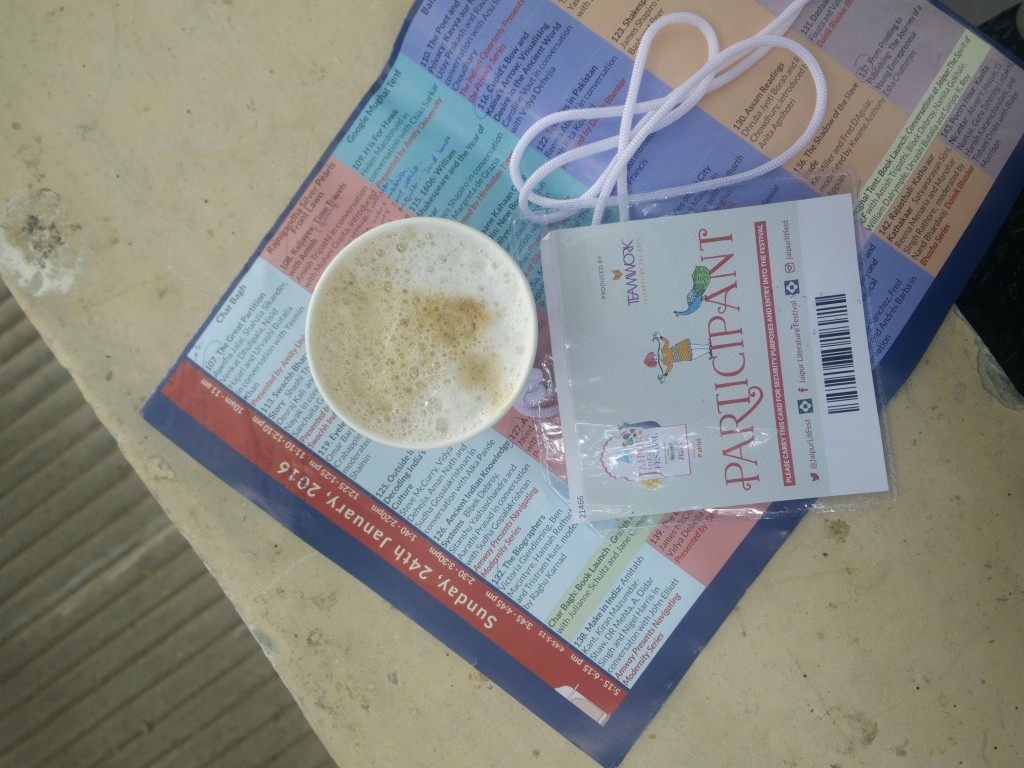 I headed over to Ford Samvad and immediately had my attention captured by Roopa Pai. There was so much passion, aggression and enthusiasm in her voice that I could not help but stop and stare. A hyper, happy speaker, she was bursting with positivity. “If you want to be successful you need to be discipline” , “Don’t label someone “evil” just because they made the wrong choice” and “Don’t blame yourself for not being good enough” were some of the thought provoking highlights of the session.

Anushka Ravishankar had her audience enthralled with an interactive session where she asked them for elements to write her story. This turned out to be an interesting tale about an investigation by Mogambo Kejriwal on George R R Martin’s murder at JLF. Quite an entertaining affair :D 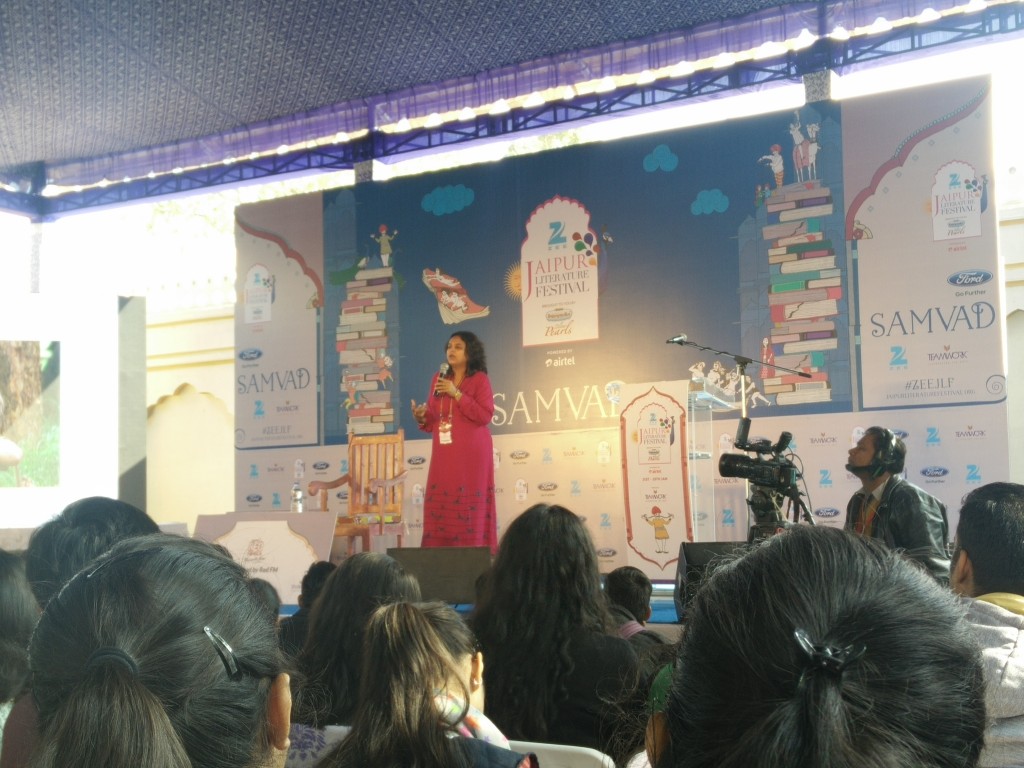 My favourite session of the day was the one where Rashmi Bansal inspired us all by sharing her thoughts on entrepreneurship. A down-to-earth, humble woman who spoke about real struggles and what it feels like to leave a secure job to follow your dreams, Rashmi Bansal shook me out of my lazy stupor and got me excited about writing again. “Don’t wait for money, if you’re passionate about it all the means will follow” is a hard-hitting statement she left us with. I couldn’t help but walk over to her and thank her for the brilliant talk, and discuss my writing with her. 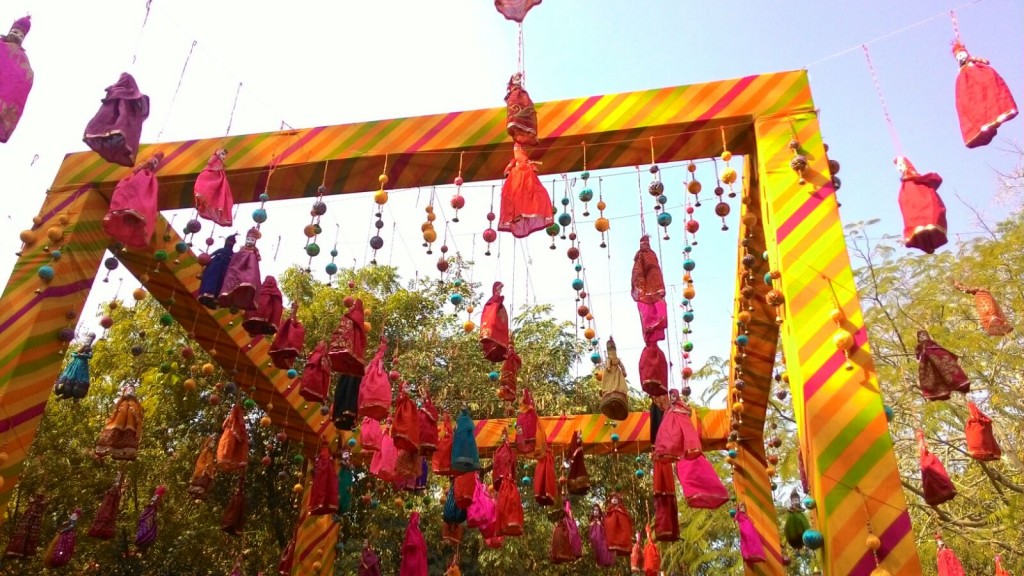 The blend of familiar & unfamiliar histories and cultures in an extraordinary setting, with a phenomenal speaker line-up to boast of made the Jaipur Literary Festival a thought-provoking and a great learning experience for literature and history enthusiasts. As for me, I would say I had a brilliant, educational holiday :)